By Nancy Werner December 7, 2022 No Comments

Congratulations to partner, Mamie Stathatos-Fulgieri, on her recent unanimous defense verdict on behalf of her obstetrician-gynecologist client in Queens County Supreme Court.

The case involved an elderly woman who experienced post-menopausal bleeding and suspected uterine cancer, requiring an endometrial biopsy. During the biopsy, the uterus was perforated and an infection followed, necessitating an exploratory laparotomy, total abdominal hysterectomy and bilateral salpingo-oophorectomy.  Mamie successfully argued this was a known and accepted risk of the procedure, despite plaintiff’s contention that the doctor went past the uterine wall during the biopsy and failed to recognize the perforation and timely treat it. Mamie effectively contended that during the procedure, the plaintiff did not offer any complaints to alert the doctor that there was any complication, and she was noted to have tolerated the procedure well.  The jury appreciated the argument and returned a unanimous defense verdict in favor of Mamie’s client. 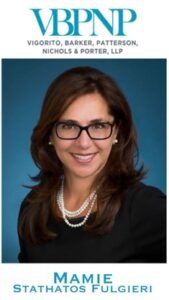